Literally one of the world's first Scout Groups !!!

Our Scout Troop was formed YEARS before the Scout Association existed ! 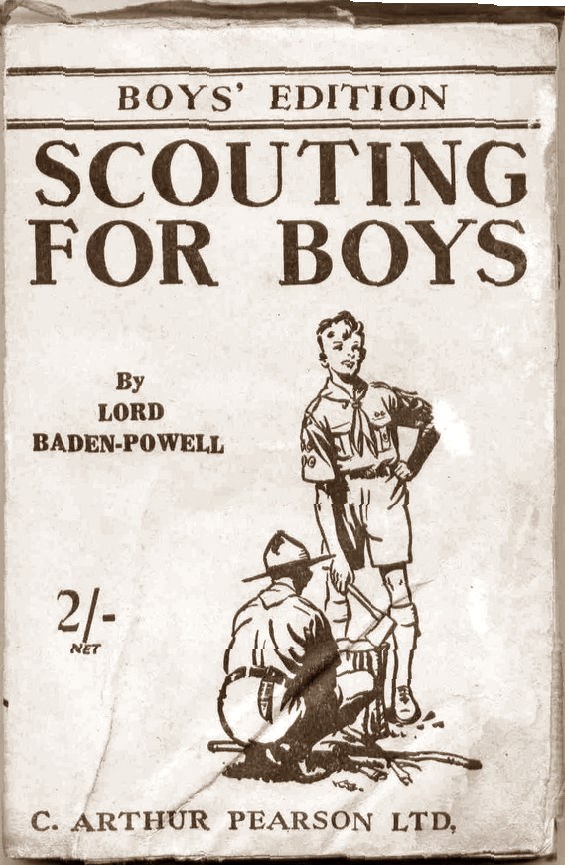 In May 1908 Scouting For Boys was published and like thousands of other young people teenagers in Croydon spontaneously formed several Scout Patrols. Our Troop was one of these and hence went on to become one of the world first Scout Groups

It was not Baden-Powell's intention to create a new youth movement. Scouting for Boys was intended for use by existing uniformed organisations such as the Boys Brigade and Cadet Corps etc. However it was soon apparent that boys and girls who were not part of existing organisations were independentely taking up Scouting. 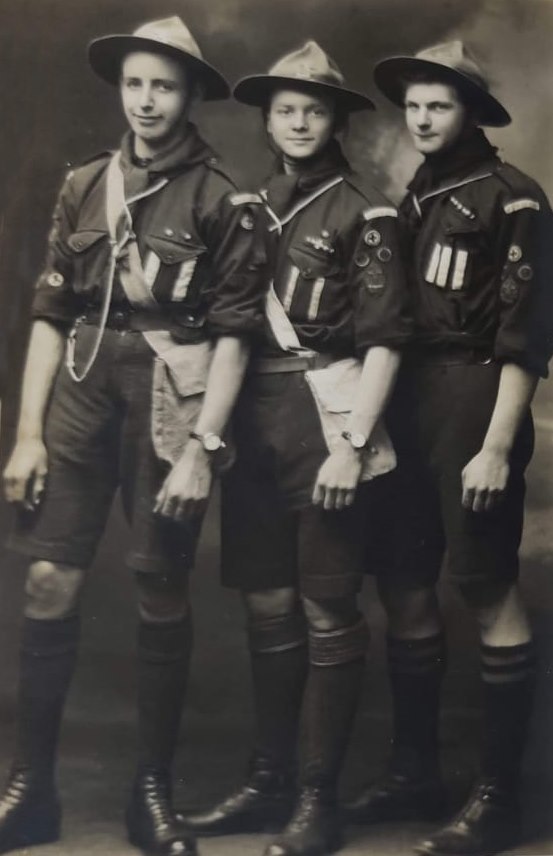 Early 10th Croydon Scouts, left to right, Stephen Hunt, Charles Harper and Frank Hemsley one of our original Scouts from 1908.

However English Law requires Royal Consent to start a uniformed organisation and while there were no objections it was a further year before The Boy Scout Association was officially granted permission to be a Uniformed Organisation under the Royal Charter of 1912. The Uniform was then officially listed in Scouting's rule book POR ("Policy Organisation and Rules"). 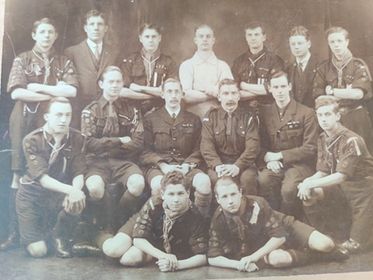 By this time the 10th Croydon had already been wearing "A Uniform" for about five years, which is why the Scouts in many of our early group photos are wearing dark green shirts and dark grey shorts. Even nowadays there are practical considerations getting an entire Scout Group to change the colour of its uniform, money was tight then and clothing was proportionaly more expensive. As everyone in the Group had been proubly wearing their uniform for five years it was well established by this point and remained unchanged for many years as can be seen from the above photo taken after the outbreak of war in 1915. 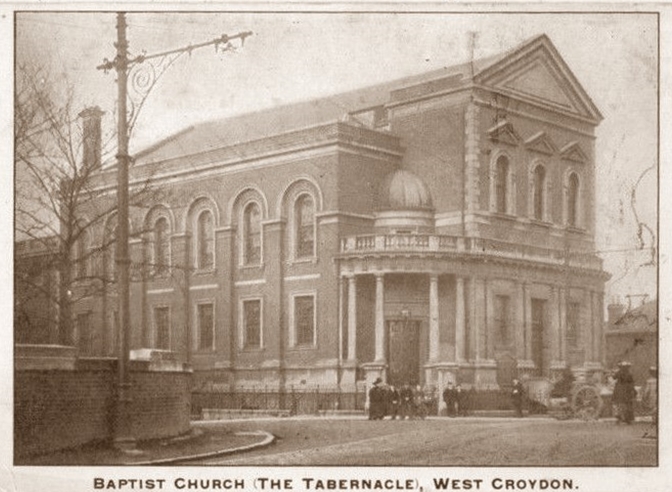 August 1908 our Troop was fortunate enough to be granted the use of the lower hall of Spurgeons Tabernacle (West Croydon Baptist Church) and our activities were watched over by Mr Walkely, the Sunday School who became known to his Scouts as "Skipper" becoming the Groups first Adult Leader. 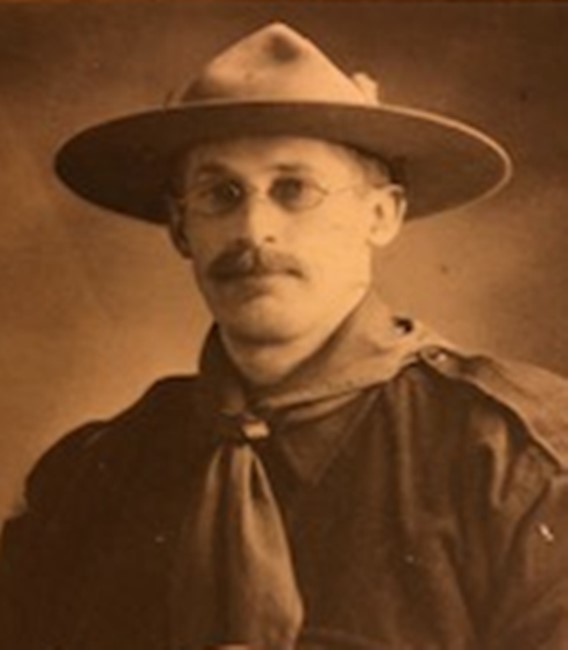 1909 we are formally founded

The following year Mr Walkely shown above went on to formally found the Group om 21st May 1909 virtually a year to the day after the publication of Scouting for Boys and a FULL YEAR before the Boy Scout Association, clearly making us one of the world's first Scout Groups.

The above letterhead is interesting as we were apparently originally part of the B. P. Scouts which is an independent Scout movement that existed before the Boy Scout Association, which may also explain the diffrent coloured uniform. In 1918 the B. P. Scouts were first to start a Rover Scout Section for Boys over 18 years of age and as you can see on the letterhead we had a Rover Scout Crew and it was established enough to have its own premises. The Rover Section was quickly adopted by other Scout Associations around the world, including The Boy Scout Association. 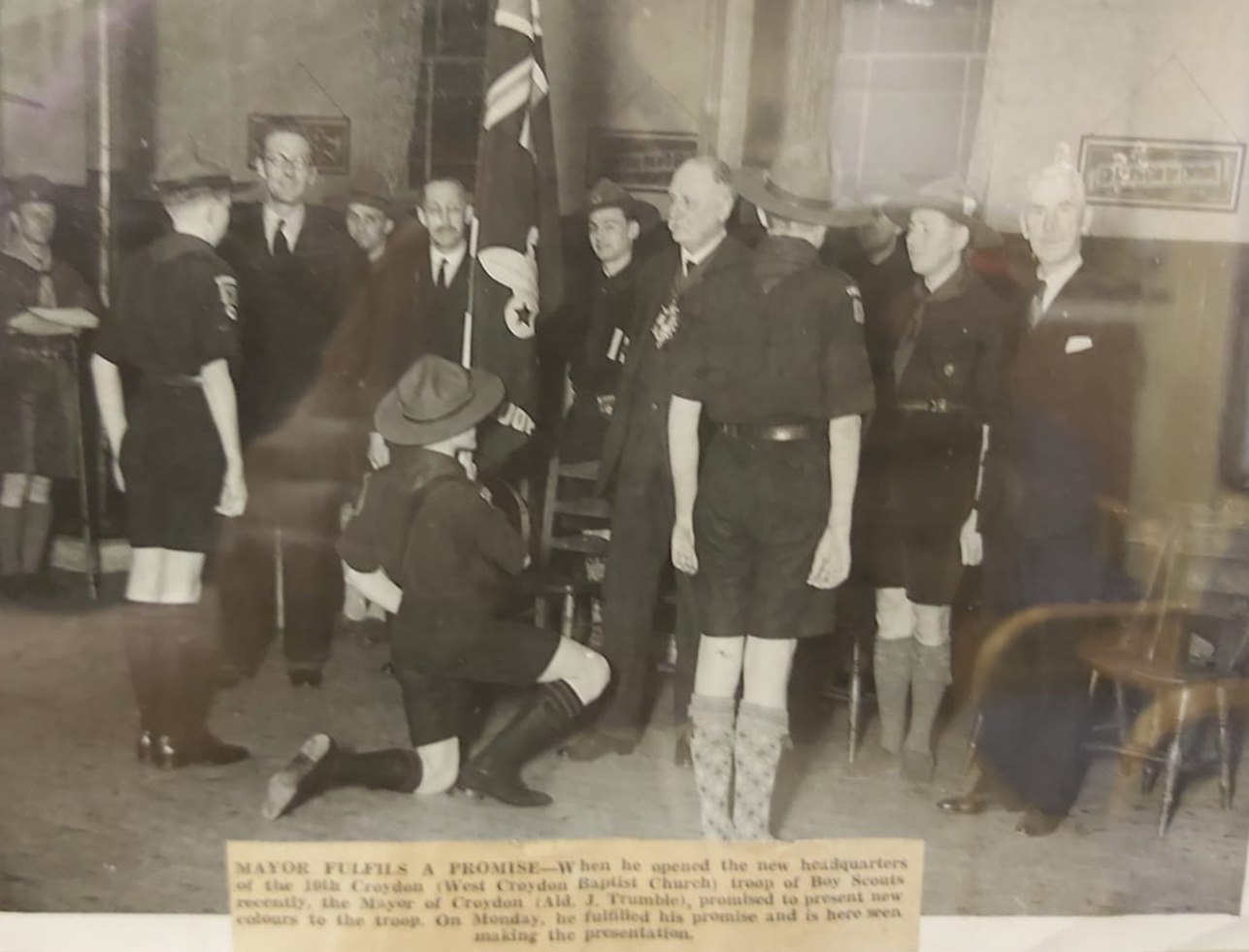 The Mayor of Croydon Alderman J Trumble opened our new HQ earlier in 1912 and at the time promised to present the Troop with a set of Colours specifically made for us. True to his word he is later seen above presenting the new Colours in the HQ he had previously opened.

When the Great War (WW1) broke out in July 1914 this country's defences were not entirely ready. As our Scout Troop had won many signalling competitions the Kent Military Command requested that Scouts from the 10th Croydon Troop should immediately assist patrolling and observing part of the Kent coastline, to fill a gap in our defences. Our Scout Troop cycled and hitch hiked down to Hythe and then bivouacked and assisted military authorities by patrolling a 45 mile section of coastline from Pegwell Bay to Dungeness. We did this with help from some other Scout Troops (all from Croydon btw).

Our role in defending the English coastline was of course strictly temporary and the area was quickly reinforced, however we had made such a good impression that when relieved by soldiers the military continued the use of Scouts as observers by enlisting local Scout Troops. 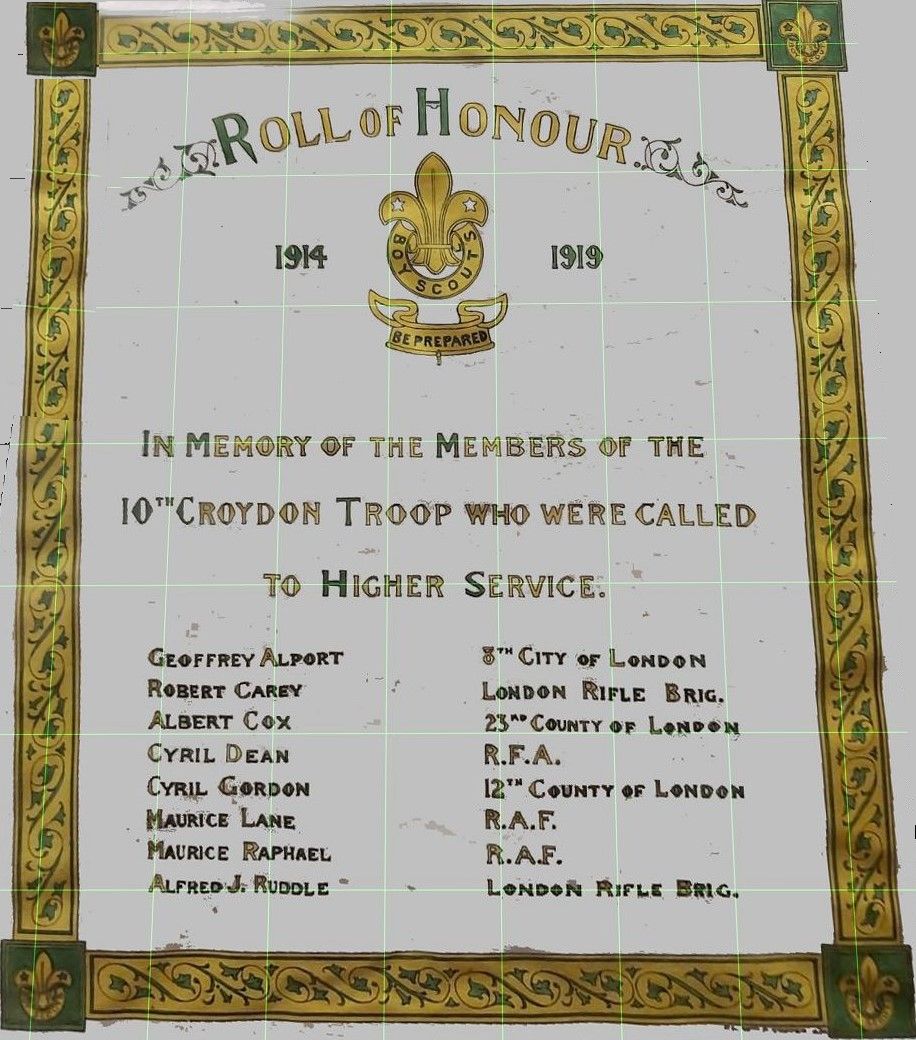 During World War One several of our older Scouts were called upon to serve in the armed forces, sadly many did not return. 66 Scouts from what is now Greater London died in World War I and tragically eight of those were from our Troop. Shown above is the original Honour Roll still on the wall in our Scouters room. 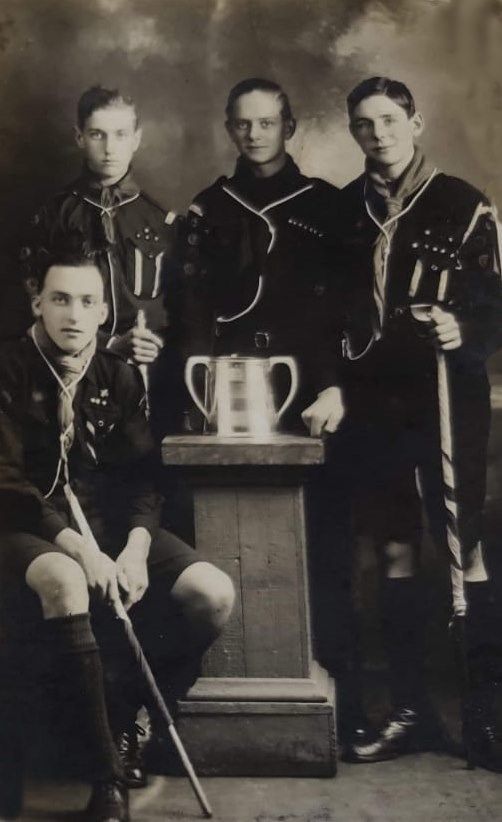 In 1915 the 10th Croydon Scout Troop won the District signals competition again. The winning team pictured pictured above are from left to right: Fred Mayes, Andy Roberts, Charles Harper, and Doug Mills. The silver stars above the breast pocket are "Service Stars", at the time one was awarded for each full year of service, at least two of the boys are wearing seven "Service Stars" meaning they had joint the Troop At the beginning of 1908, making them founder members of the tenth Croydon. Also making them some of the first Scouts in the entire World. 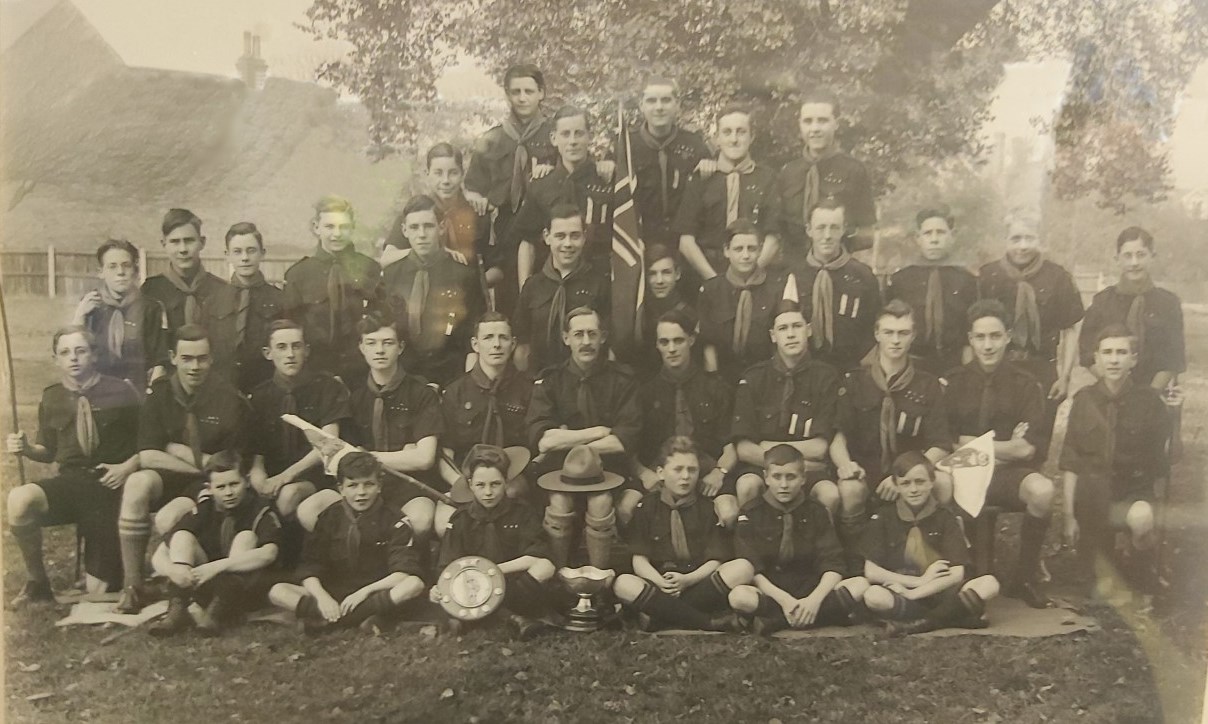 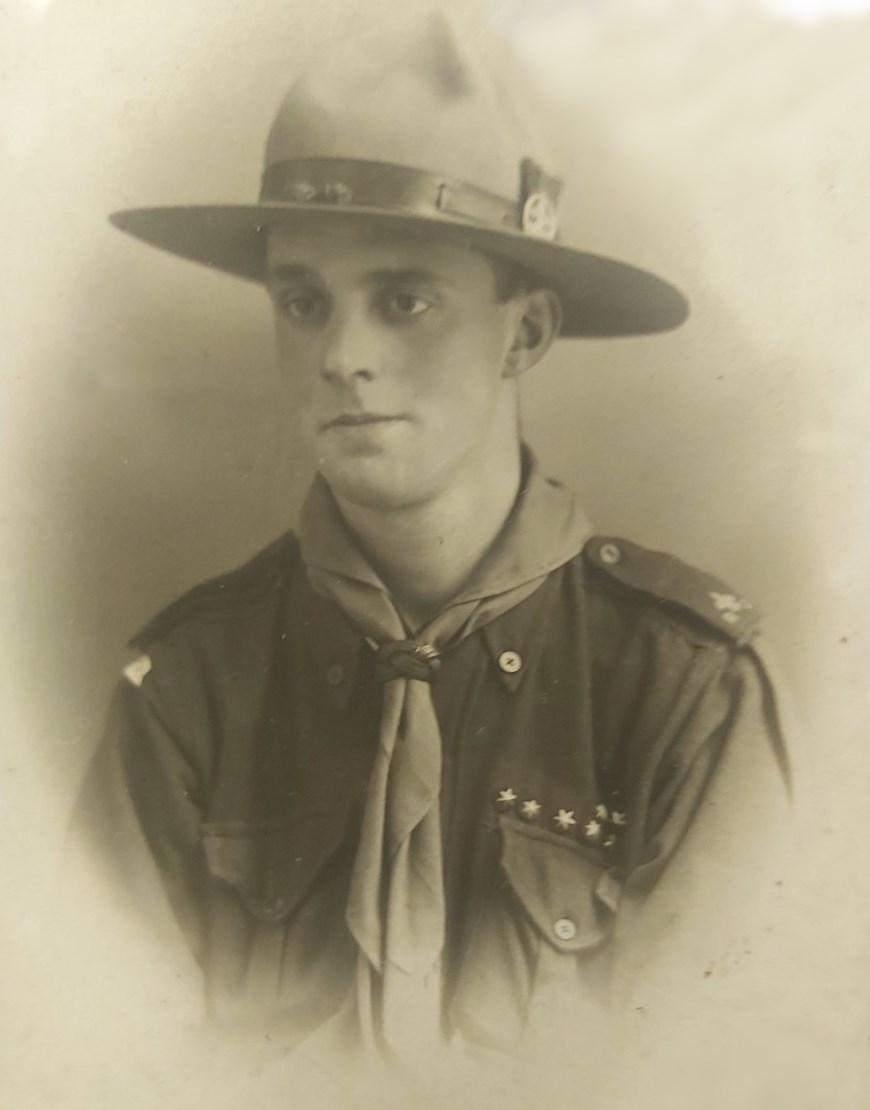 The young man in the above photo is Clayton (Clay) Mashman the Troops ASM in 1925 when the picture was taken. The ASM is second in charge after Skipper walkeley. Looking at the "Service Stars" above his pocket it looks like he went through the Troop and stayed on a a leader. 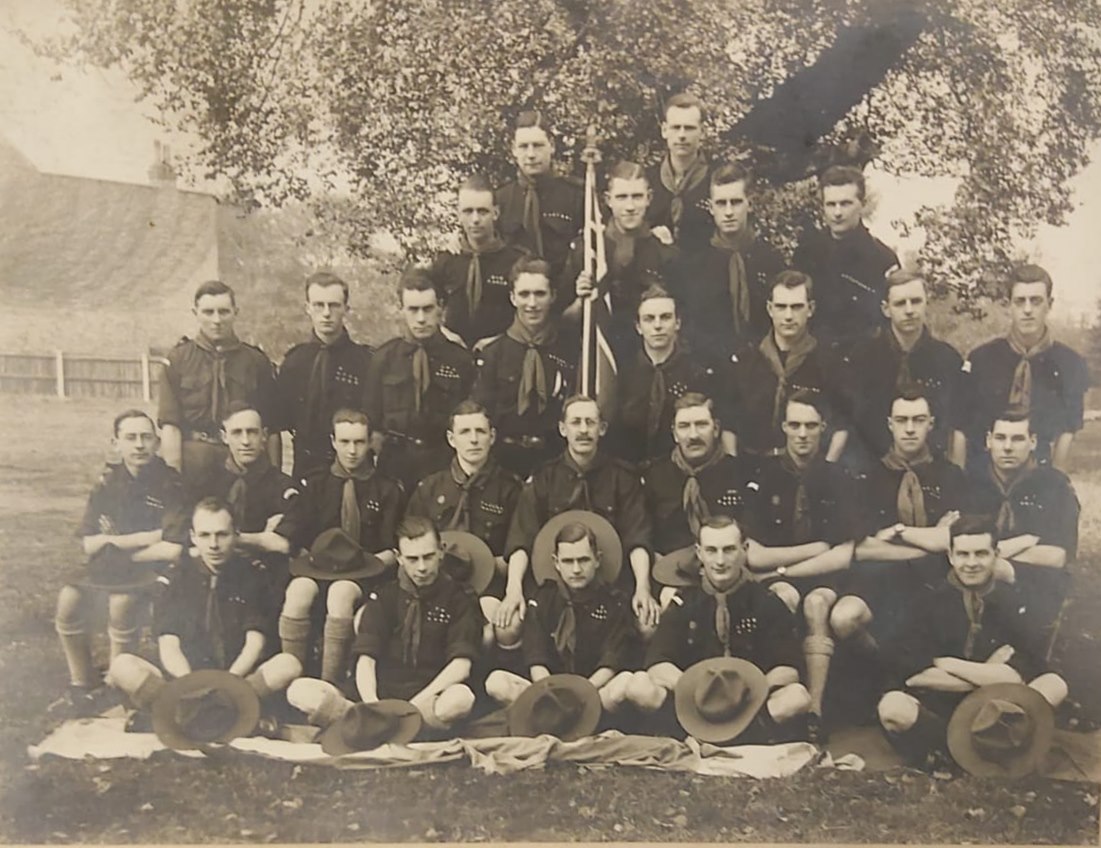 This is a photograph of the 10th Croydon's thriving Rover Crew taken in 1928 prior to their departure for the 1929 World Scout Jamboree at Arrowe Park in Upton, near Birkenhead. Where our Scouts were among 56,000 other Scouts from 35 countries, which was the largest World Scout Jamboree up to this time.

Many of the above crew appear to be wearing ten or more annual "Service Stars", meaning they had been with the Troop for at least ten full years, almost certainly more. 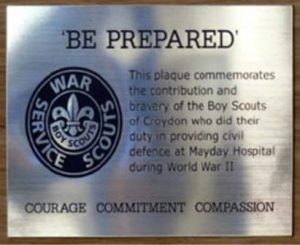 Tragically between 1939 to 1945 war broke out again. Scouts too young for military service helped at Mayday Hospital working as messengers, look-outs, stretcher-bearers and various other duties, even assisting in operations and carrying out the dead.

Again some of our older Scouts joined the military and served their country and again many did not return. Today we honour the memory of all those who gave their lives so that we may be free. Above are the three wooden plaques that commemorate our loss in both World Wars. The distortion is caused as they are in an elevated position, I had to get seperate photos and photoshop them together.

After the War the group basically moved it's Rover Scout Crew from the WigWam in Elmwood Road (the site becoming part of Elmwood School) into a house at 115 St James Road. Some years later in the early 1960's we were gifted the house next door at 113 St James Road, for which we were very grateful, even though it was in MUCH need of repair. And many years of very serious fund raising started to build our current HQ on the combined site 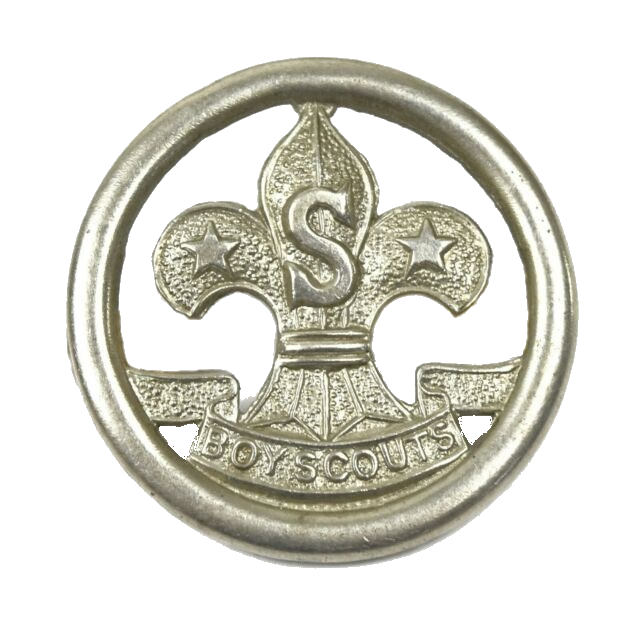 The Scout Association had launched the Senior Scout Section in 1946, allowing Boy Scouts aged fifteen to eighteen years to form separate Troops, with age appropriate activities. However the National Service Act 1948 required healthy males over 17 to serve in the armed forces for 18 months. This only ended when the last conscripted soldiers left military service in 1963.

With National Service over the 10th Croydon wanted to start a Senior Scout Troop, as did Frank Hepworth GSL of the 52nd Croydon who ran his troop from a nearby Scout Hall called "The Venture", So it was decided to start a joint Senior Scout Troop, comprising older boys from both Troops. It was very informal, no leaders, we officially operated from the "The Venture" Scout HQ, but held informal committee meetings to plan our activities in a first floor room of 115 St James Road.

Not surprisingly we were nicknamed "The Venture Scouts" after "The Venture" Scout Hall the nickname stuck probably in part because it was "politically acceptable" to both Scout Groups.

In those days Scouts were all taught how to fell trees and control the fall, and so we raised funds by felling trees people wanted removed, this was "VERY" profitable, and great fun. We used the money to buy rock climbing equipment, canoes and caving equipment. For caving and potholing we all became members of the "The Boarder Climbing and Caving Club" gaining access to their facilities in the West Country and to their expertise, we we very active and highly successful.

In 1967, the Scout Association itself started something called venture Scouts, which appeared to do everything we had been doing for some time, the model appears identical (if a bit more formal). Mr Bernard Osbourn, the District Commissioner at the time generously gifted all of our equipment to a new venture unit being set up in Croydon. We were told we were welcome to join it, being young, very independant and stubborn, sadly not one of us took up that offer.

Looking back it looks as though the "Venture Scouts" at the 10th Croydon were the inspiration for the Venture Scout Section. We were certainly the source of the equipment for Croydons "first" venture unit, and you cannot help but notice the similarity in the names. Perhaps that's all coincidence, but then again the Scout Association has always said "It is a movement led by it's members". 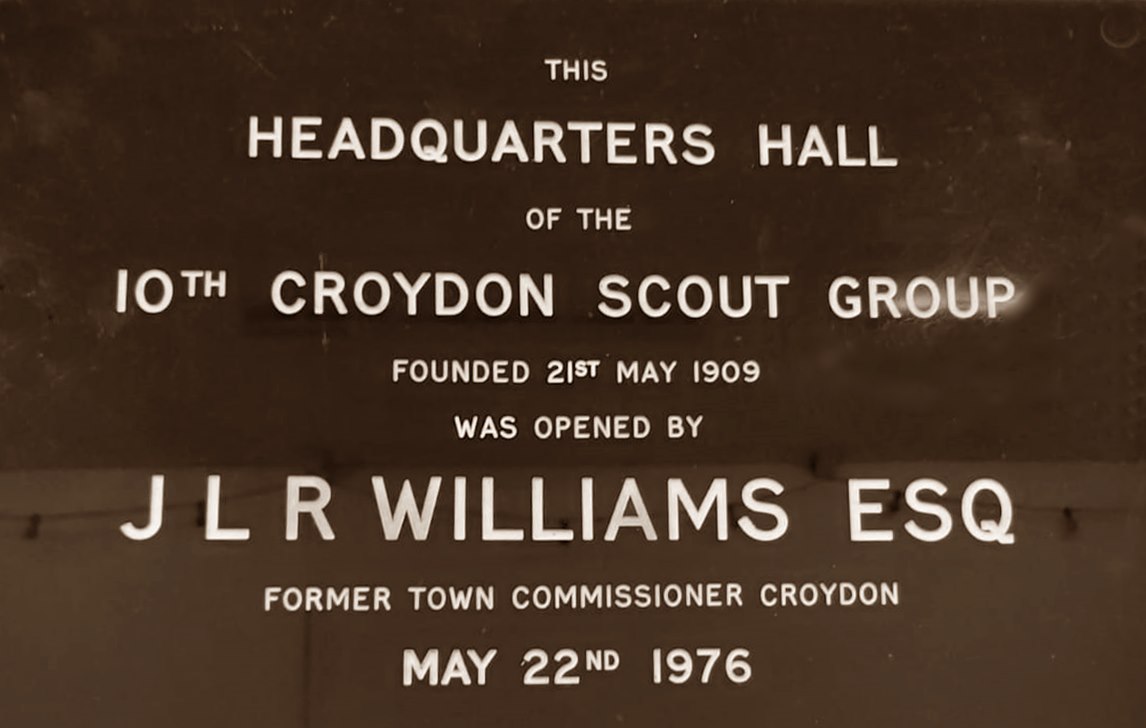 After many years of fundaising, collection tens of thousands of jam jars (worth one old penny each). And of tons of old newspapers which were sold to make wood pulp for new newspapers. And felling a great number of Croydon's unwanted trees. We finally had the money to develop the site at 113 - 115 St James Road. Both the houses together with the (by now) very old Scout Hall behind them were demolished, the site cleared and our modern purpose built Scout hall built in their place. Our HQ is actually a fair size, the main hall alone is about 1000 square feet, but in photos it looks small, as it is dwarfed by the huge and magnificient West Croydon Baptist Church to our right, and a newly enlarged office building to our left. 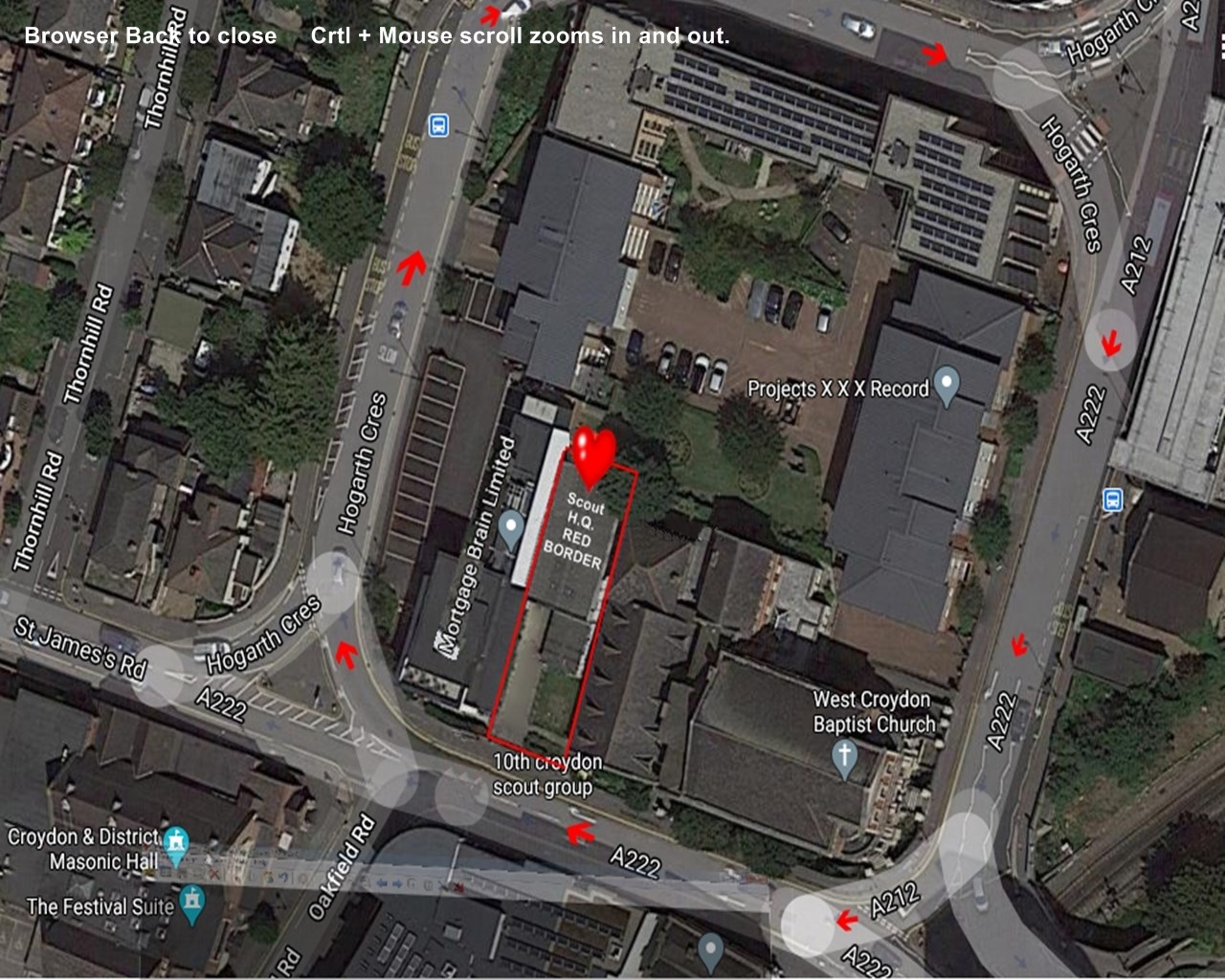 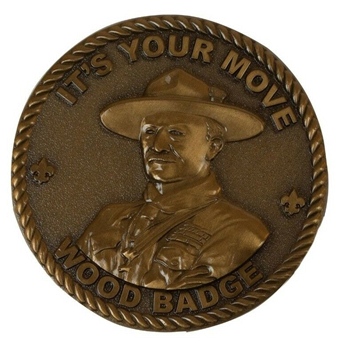 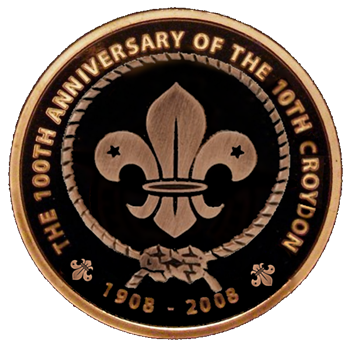 We have always spent most of our time looking to the future, not the past. It was only while making this web site that we realised we are one of the
"World's Oldest Scout Groups". 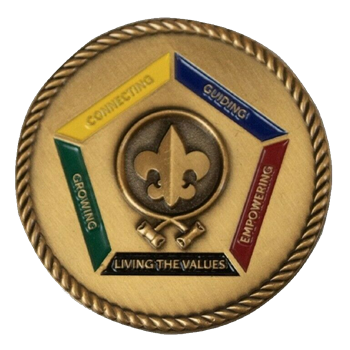 We would be both grateful and delighted to recieve any group history from anyone, in any format, covering any time period. We would like to more fully document the life of the Group while records are still exist.